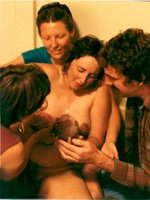 Copy of My Official Letter to the New Yorker

I am a former labor and delivery room nurse, mother of three and a grandmother. While my ovaries are honorably retired, my daughters are still of childbearing age. My first grandson was a breech baby born by electively scheduled cesarean. My daughter’s recovery took nine miserable months. Three years later his younger brother was born spontaneously. Her recovery was night and day different.

I also am a professional midwife who provides care to healthy women. Our practice uses the science-based principles of physiological management. Our cesarean rate is under 4%. Physiological management of childbirth is preventative – that is, associated with the lowest rate of mortality and morbidity for both mothers and babies. Its methods are also protective of the mother’s pelvic floor. This model of normal birth care is both safe and cost-effective. It is the standard used worldwide by family practice physicians, midwives and obstetricians in countries with much better maternal-infant outcomes than the .

The obstetrical package – the centerpiece of ‘industrialized’ childbirth glowingly described by Dr Gawande – is associated with high levels of drug and anesthetic use, episiotomy, instrumental delivery (associated w/ stress incontinence), cesarean surgery, reduced rates of breastfeedingand increased number and severity of complications. When applied routinely, as it is in the , to healthy women with normal pregnancies (70%), it is the opposite of evidence-based care. The obstetrical package for a healthy population – including the casual use of cesarean -- is not healthier, safer, cheaper or better for society than physiologic birth.

Nonetheless the author of the THE SCORE, along with many in the obstetrical profession, is promoting the notion that routinely scheduled cesareans are somehow safer and better than normal birth. But the science is unequivocal – the liberal or elective use of c-section does NOT improve perinatal outcomes. In addition to immediate surgical problems for the mother, other serious complications of cesareans are displaced to future pregnancies [1,3,4,5]. The notion that increased levels of morbidity and mortality are justified in pursuit of safety is an oxymoron.

Without ever establishing proof of efficacy, Cesarean section has become the most commonly performed surgery in the . In 2005 it was 29% of all births. In 2003, 1.2 million cesareans cost $14.6 billion. [2] Forty percent of all maternity care is paid for by state and federal Medicaid programs; the other 60% is billed to employer-sponsored health insurance. Like all business expenses, the added cost of elective cesarean is incorporated into the price of goods and services and then passed on to us. For example, automakers add $1500 for employee health insurance to the cost of every car manufactured in the . If more births are by elective, unnecessary surgery, that cost will rise even more rapidly, making ever less competitive in a global economy.

So when I read articles such as THE SCORE, I feel like in Wonderland. I have fallen down a rabbit hole into a land where professionals engage in double-speak and investigative journalism has been replaced by faith-based reporting. In this war on women’s biology, truth is also a victim.

Decades of medical and surgical interventions (i.e., the obstetrical package) used routinely on all childbearing women has resulted in unnecessary morbidity in otherwise normal vaginal birth. According to the Listening to Mothers surveys by the Maternity Center Association of NYC, over 90% of low-risk healthy women have seven or more significant intervention in a normal hospital birth and 47% are exposed to one or more surgical procedures or instrumental delivery. [3b]

The lack of obstetrical support for normal biology, paired with the sequelae of serious interventions, makes dismal statistics for vaginal birth. As a result, C-section starts to look pretty good --- like it’s not that much more dangerous. Why not “have it your way”, especially since Cesarean surgery is convenient for obstetricians, profitable for hospitals and makes interesting copy for newspapers on a slow news day?

The answer lies in the research circulated by doctors for other doctors, which tells quite a different story. According to insider information easily available to obstetricians [2], the sequelae of cesarean surgery include a grim list of intra-operative and post-op complications. In addition there is a whole new category of delayed and downstream complications unique to post-cesarean reproduction, which result in a total of 33 Cesarean-related ‘route of delivery’ complications, compared to only 4 route-of-delivery risks for spontaneous vaginal birth. [3a]

According to a preponderance of scientific literature, cesarean delivery more than doubles the rate of maternal death when compared to normal vaginal birth. An excellent study just published in September 2006 (file attached) found a 3.5 fold increase in the deaths of healthy women who had elective cesareans performed before onset of labor [4]. Anesthesia, infection (3 times higher following cesarean), and fatal blood clots (9 times higher following cesarean) were the big killers – the same complications that accompany all forms of surgery.

In addition to increased fatalities, these adverse events can also result in serious disability or permanent neurological damage for the new mother. [1] Cesarean increases the incidence of intra-operative hemorrhage and blood transfusions, and has a 13 times greater emergency hysterectomy rate than vaginal delivery. Post-operative complications include prolonged surgical pain, diminished mobility, bowel obstruction and difficulty breastfeeding.

Should a cesarean mother want to have another baby, she faces a secondary infertility rate of 6%, and an increased rate of ectopic pregnancies and miscarriages. Mothers in post-cesarean pregnancies have higher rates of serious placental problems, including placenta previa (placenta over the cervix) and placenta accreta or percreta (implanted in or through the wall of the uterus). Placenta percreta requires a hysterectomy at delivery and carries a maternal mortality rate of 7 to 10 % -- even in the very best, most well-equipped hospitals, in an operating room full of the most experienced surgeons. In addition, the likelihood of placental anomalies rises with each subsequent pregnancy, making it the dangerous gift that keeps on giving. [1]

Additional risks to fetuses and newborns in post-cesarean pregnancies include increased fetal demise & stillbirth rates and, in subsequent births, mortality and morbidity due to uterine rupture. For the baby, being born by any cesarean, primary or repeat, increases the rate of operative lacerations, respiratory distress, admission to the NICU, exposure to serious iatrogenic complications such as infection and drug errors in the special care nursery, decreased breastfeeding and increased rates of asthma in childhood and as an adult. [1]

Then there is the huge economic drain on our health care system. Cesareans cost 2 to 4 times more than normal hospital births, a figure that doesn’t count surgical anesthesia, special care nursery charges or any of the delayed and downstream problems described above. The costs of infertility treatments are enormous, as is the expense of mandatory repeat cesareans -- mandatory because most OBs are no longer allowed by their malpractice carriers and/or their hospitals to perform VBACs (vaginal birth after cesarean).

Unfortunately, THE SCORE did nothing to advance our understanding of this complex topic or promote a truly science-based debate. As with claims of WMDs, an informed public should demand evidence before taking drastic actions with permanent and potentially-harmful consequences. The alternative is to institutionalize dangerous and expensive practices without any public oversight or proof of benefit.

A letter by a family practice physician published just this week (Nov 7th) in the Canadian Medical Association Journal entitled “Not Safer and Not Cheaper”, sums up how the scientific data was manipulated and describes the many egregious consequences, personal as well as economic:

“ … in their economic analysis, [they] looked only at immediate costs, thus vastly underestimating the real costs of elective cesarean for breech or any birth. Since most women will have more than one birth, the presence of a uterine scar will expose women to increases in placenta previa and placenta acreta,5 ectopic pregnancy,6 abruption,5 infertility,7 stillbirth8 and excess hospital readmissions because of the cesarean9 and adhesion-related intestinal obstruction.10 All of these costs have been ignored.

This analysis led to headlines in the popular press that cesarean births are both safer and cheaper. This lack of nuance fuels societal views that increasingly suggest that cesarean section is just another way of giving birth; in addition, it undermines the confidence of a generation of women who are coming to believe that they cannot give birth without massive technological assistance.”

We are long overdue for a robust public discourse about the routine use of the infamous ‘obstetrical package’ on healthy women. As for the obstetrical profession’s official distain and disregard for the preventative and protective principles of physiological management, well, the facts are plentiful. Just follow the money.

Personally, I would encourage the New Yorker to provide equal time and a rematch over this very biased and misleading article. The future of normal birth hangs in the balance.

[1] Ob.Gyn.News – www.obgynnews.com --The Leading Independent Newspaper for the Obstetrician /Gynecologist (search back issue archive by date, topic or title)

C-Section Linked to Stillbirth in Next Pregnancy, 05/15/03

Placental Invasion on the Increase – hike in C-Section may be responsible, 01/15/03
Placenta Previa, C-Section History Up Accreta Risk, 09/15/01

[2] August 02, 2005 WASHINGTON (Reuters) The most common U.S. hospital procedure is the Caesarean section, with 1.2 million of the operations done each year, according to a government report. Caesarean sections cost $14.6 billion in total charges in 2003, the report from the Agency for Healthcare Research and Quality's Healthcare Cost and Utilization Project found. The report, which can be found on the Internet at http://www.hcup.ahrq.gov/, lists the other top five in-patient hospital procedures

Posted by faith gibson at 1:18 PM No comments: